Just to get a taste of what’s been fixed recently, here’s the list: 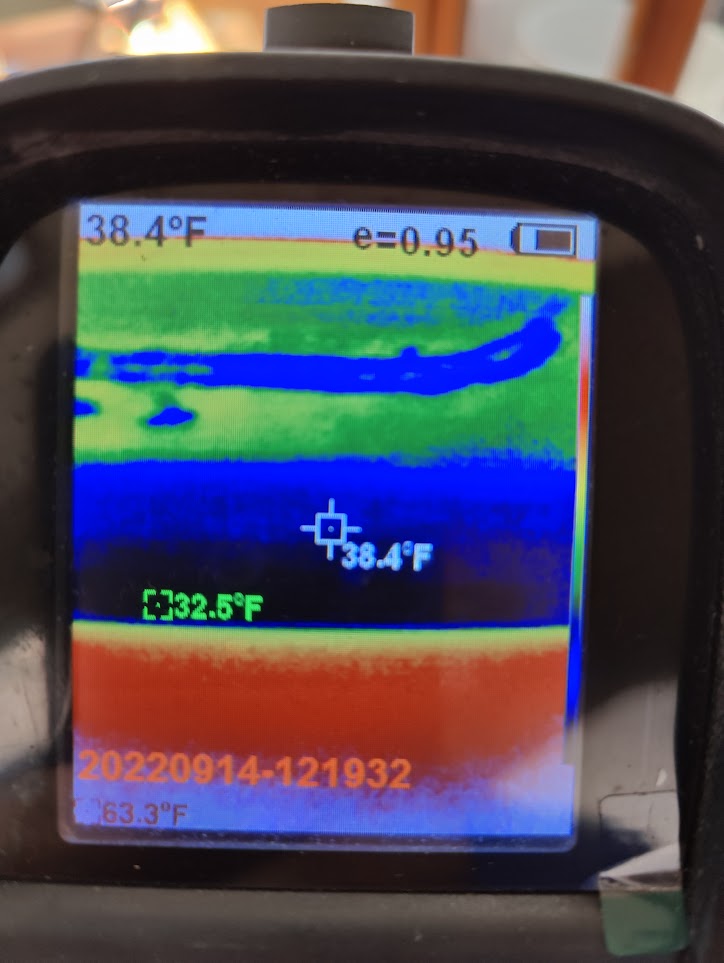 I replaced the refrigerant before finally realizing what the actual problem was: the freezer is powered by the solar charger. If the boat runs out of power, it shuts down the freezer, but doesn’t start it back up. It’s working great now! The pic is a thermal image after only about 2 hours of operation -- already below freezing! it got down to 0 the next day. 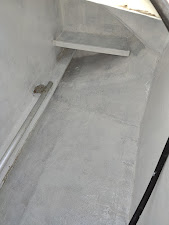 The forward compartment where the spare fuel is kept was pretty grungy. Ed repainted it and it looks great! it’s all packed up with currently-empty fuel containers. We probably won’t need to fill them until Morro Bay, or maybe even San Diego.

The whole trampoline setup isn’t great, but I think it’s better now. The lines were tightened and some missing rings were replaced. There is a little more work to do here now that we added an extra ring back in, but it should be safe enough for Mexico.

This was probably the easiest, just adding some steel wire and some marine grade padlocks. Someone would need an angle grinder or some heavy bolt cutters to have a chance of stealing the outboard or the BBQ now.

While servicing the outboard, the glass just popped out. Probably one cause of the water that seems to accumulate in that compartment. The glass was removed, a new piece was fabricated at Tap Plastics, and it was reinstalled. It looks a lot better. The old piece was broken anyway. 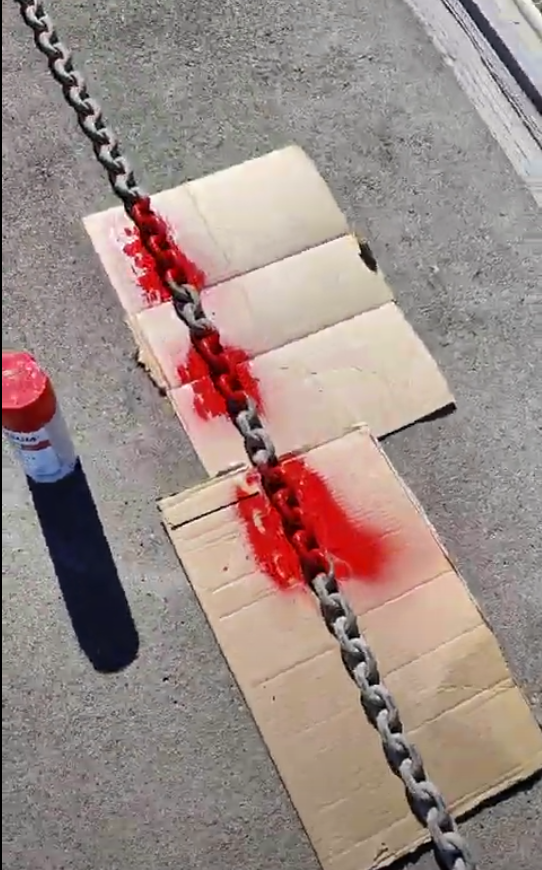 This was a lot of work. We had to remove all the chain, inspect it, mark it every 30 feet, and replace all the fittings. That chain is pretty heavy. I think it’s in much better shape now. For reference, there is 245 feet of chain and another 100+ feet of rope. The rope is also marked. We also replaced the safety line that holds the anchor while underway. Here’s a full video of the chain marks. 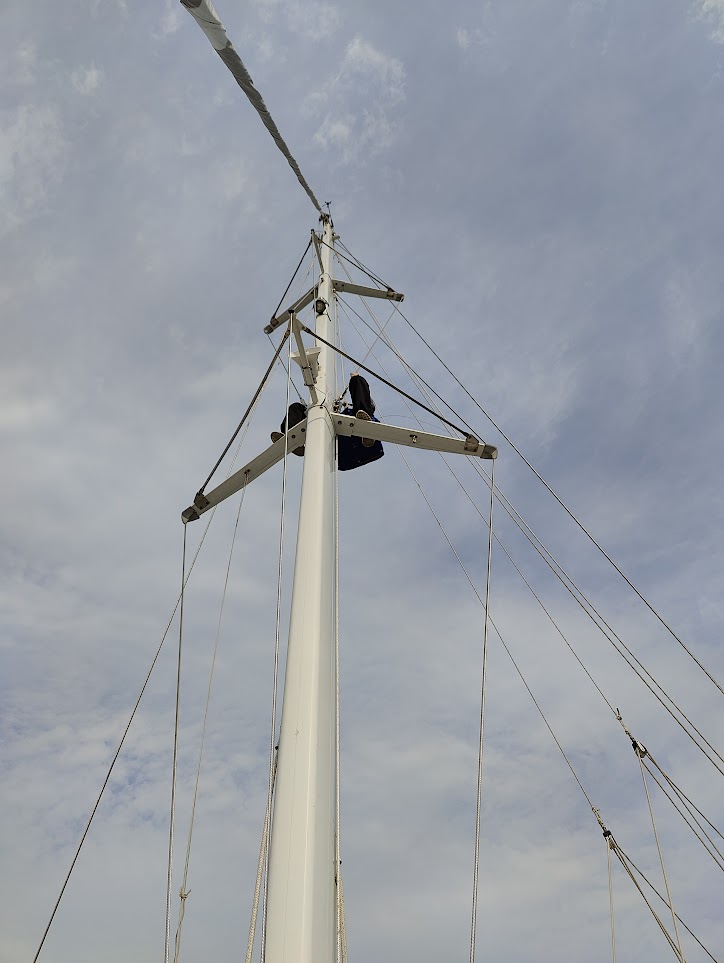 Charlene, who sailed with us to Hawaii, was kind enough to be my mast climbing inspector. She uncovered one bird wire that came loose, but succesfuly climbed the mast and took lots of photos. Very little was wrong with the mast, which is great. The rig is really strong on this boat. 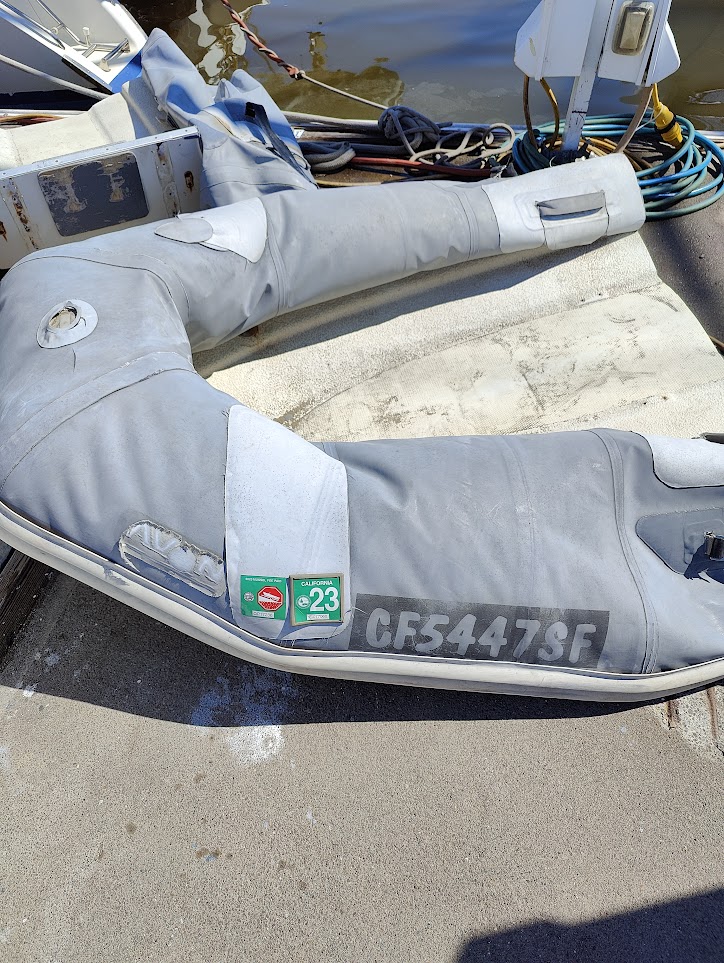 Never realized chopping a dinghy in half would be so satisfying. This dinghy was made in 1994, and has been in the sun for a long time. Sal’s inflatables said it’s beyond repair, with several places where the hypalon was separating from the mesh beneath. West Marine sold me a dinghy at a discount. Unfortunately, we damaged it when transporting it to the marina, but it’s now patched back up. Installing the old dinghy wheels was a task too -- we had to manufacture a bracket spacer. But it now looks great!

The port side tank sprung a leak just after we left Hawaii, and so I had to replace it. The replacement tank is a little smaller, but made from a thick polyethylene which will probably outlive me. This involved replacing the floor and the mounting system in that compartment. Probably the biggest challenge was removing the old tank.

Other big job. This was from some rotten crossbeams in the floor. Not sure how they got that way, but I replaced them. Now the floor is a lot more solid!

After some poor decisions on the way back from Monterey, the jib had some tears. Doyle Sails in Alameda did some repairs on this, and inspected my main as well. The jib halyard was rerun after returning from Hawaii and it seems to be holding up well. I’d like to replace this halyard with some dyneema with a cover, but that’s a project for another day.

Another relatively easy job. The valves were leaking a little which doesn’t really cause too much trouble. It’s worse if they get plugged up, but that didn’t happen. These valves are needed to prevent siphoning water into the engine. I’d like to completely eliminate these, but that would require some fancy engineering of the exhaust system, which I’m not quite ready to tackle this year.

This was an amazing find. We first tested the water in the bilge and found it to be salt water, eliminating all the fresh water leak possibilities. After inspecting and draining the whole raw water system, we saw some water from some tape we had installed over the top of the drain plug for the lift muffler. The grommet was inserted backwards, probably after cleaning it out at some point. Once flipping it the other way, and removing the tape, the leak stopped! This sounds really easy but we had to remove the muffler to get clear access to it and understand the problem fully. We also checked all of the fittings, including cleaning out the raw water strainer.

Just some routine maintenance here. The engine-mounted fuel filters are 10 micron filters that have never been replaced, although they should have been done by now. These filters are behind the wall mounted racor fuel/water separator with a separate filter. Arguably I should be using 3 micron filters as a pre-filter but I’m sticking with 10 micron for now. 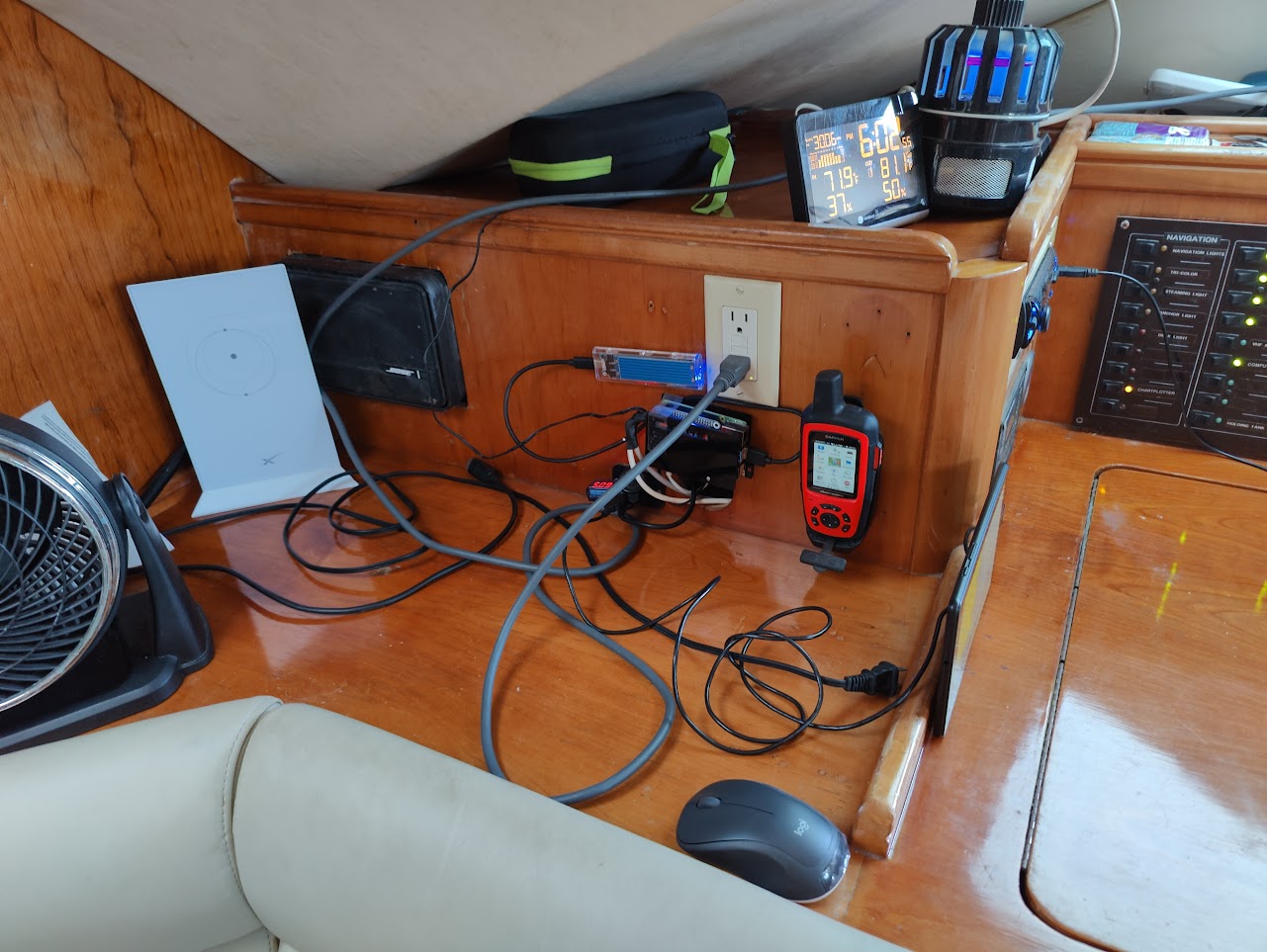 Well, not perfect yet, but moving the raspberry pi computer to the side panel is a huge improvement. It’s out of the way more, and I rarely need access to it while underway. Rerunning all the cables leaves me in a better place now for running the pi while sailing. It is theoretically possible for the RPi to adjust the course or even indicate that we’re properly docked. I think this would be a fantastic project to render the boat overlayed with a satellite image so you can dock better, assuming I have a very accurate GPS. 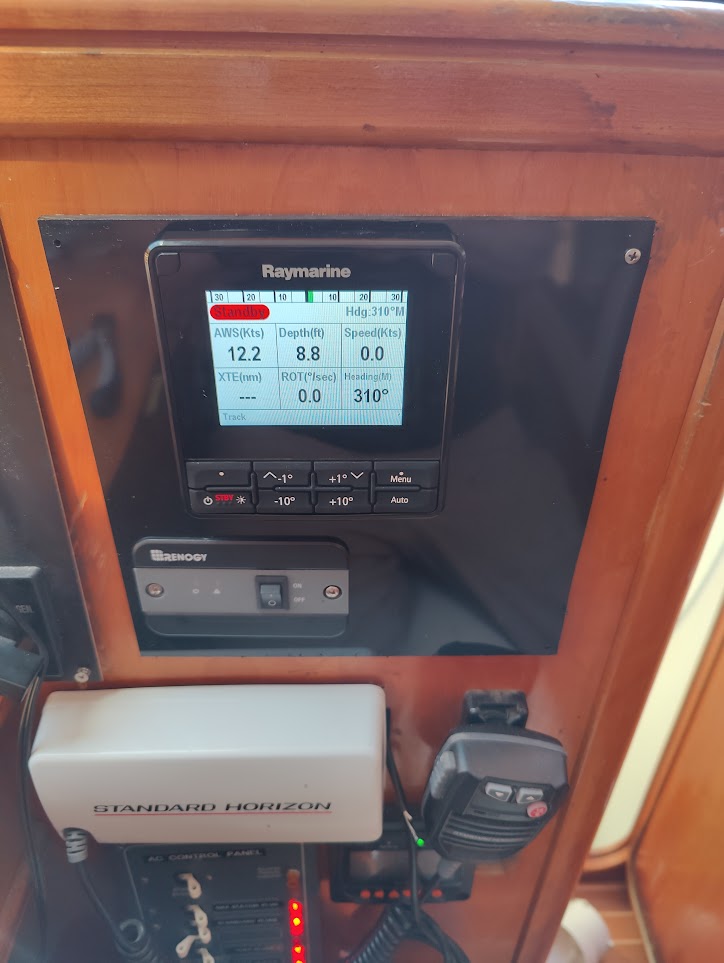 One thing we really needed on the way back from Hawaii was a way to steer from inside. There is now an autopilot head over the nav desk. This can be used to make minor course corrections, but also will serve as an alarm in case something goes wrong at night. I also cut up a panel to mount it cleaner.