Seems like there are so many of them. I learned some new ones!

Alenuihaha. While Google Maps shows the channel between The Big Island and Maui the Maui Channel, the proper name for it is the Alenuihaha channel. The emphasis is on the “haha” part. Crossing this channel was perhaps one of the toughest passages I’ve made to date.

When we left Hilo, we saw that the forecast was for some gusts to around 35 knots in the channel, but the steady wind was steady only around 20. The actuals were a lot worse. I have some video of the worst of it, but I hesitate to post it because when I watch it, it seemed like no big deal. I just remember walls of water behind the boat pushing us along.

We had some trouble after passing the channel because there were winds clearly in the 40s. Even though we shortened sail to a tiny jib and a triple reefed main, it still felt like there was too much sail up. I considered the drogue at some point, but we were able to turn south just enough to make it behind the lee of the island.

It still was rough and windy behind the north end of the island. We originally planned on anchoring in a little known Nishimura Bay. It’s not even on the charts, but the book I have about sailing the Hawaiian Islands says it’s peaceful and calm in the bay despite heavy winds outside the bay. What they didn’t say was that it’s really hard to get there when the winds are blowing hard outside the bay. We gave up and went on to Kawaihai. Rather than going into the harbor and anchoring, we found a spot just outside the harbor that was really calm. The were whitecaps in the anchorage area of the harbor but we were pretty well protected. I let out a lot of rode, using all the chain I had (150 feet) and probably another 30 feet of rope, in about 30 feet of water. Our swing looks great. We were able to stay clear of the channel and stay far enough offshore that even if we slipped a little, we’d be fine.

This spot is pretty good. Great place to land the dinghy near a launch ramp, a nice restaurant and a lower end hamburger/taco place. There’s even a place that does shave ice.

Anaehoomalu Bay. The locals call this A Bay since the name is so long and hard to say. This is perhaps our next stop. It’s about 2 hours south of where we are now, and recommended by the marina office. Supposed to have an amazing beach and some good places to hang out and eat. We’ll see. 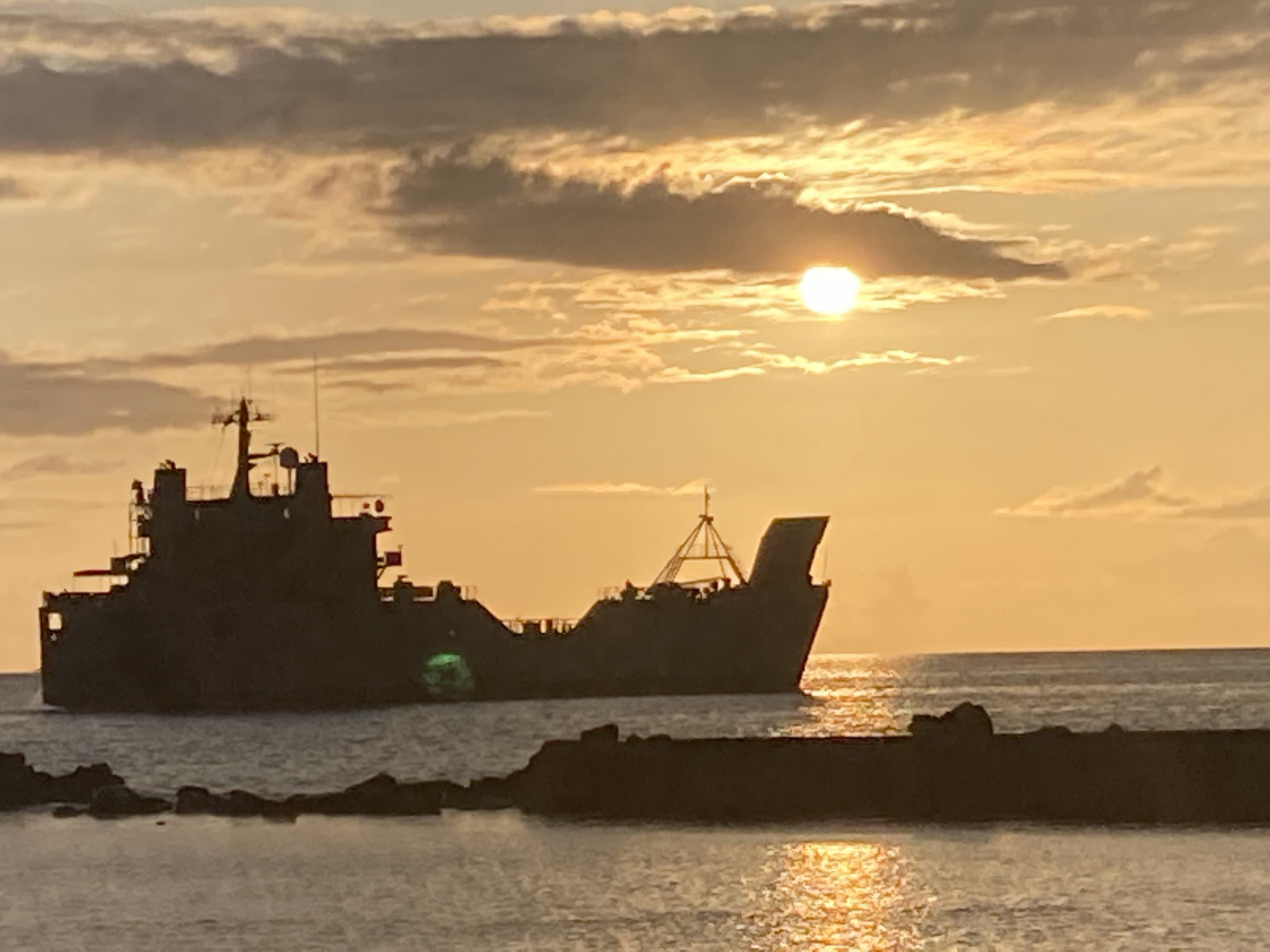 Ed took this pic of a military vessel departing at sunset today. So beautiful.

Was thinking of leaving tomorrow but probably leave for there on Saturday or Sunday now depending on the weather.

One of the solar panels blew off in the wind, and we have some canvas damage. A few of the canvas coverings also blew off and some are torn. 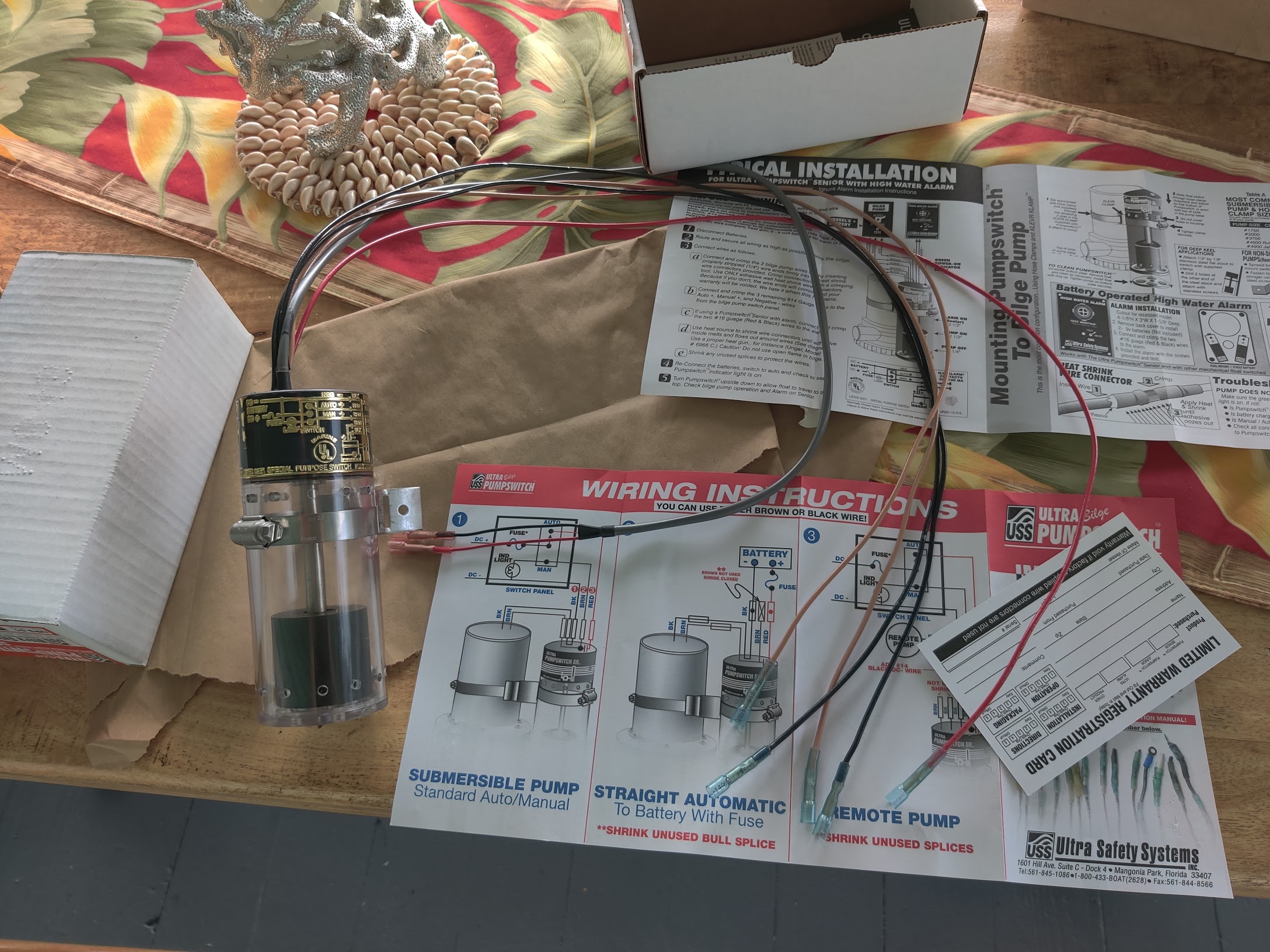 While that’s mostly cosmetic, some of the bilge pumps are out again. This is a really huge problem, so I ordered and received some really expensive bilge pump switches (almost $200 each) that are supposed to be the best.

These switches have a lot of wires. This is so it can have a small LED to indicate that the switch is open, and keeps you from putting any two wires into the same connector. Originally I couldn’t understand why you needed so many wires but it makes complete sense now. All of the junctions are sealed within the top part of the pump.